I worked graveyard shift at Kennedy Airport for TWA in the 1970s. One night, a Boeing 707 bound for Europe and with passengers on board had no High Frequency (HF) communications. This was required for flight. The earlier shift had determined the problem to be the HF antenna tuner. The plane would be going nowhere until it was fixed, which meant that the unit had to be replaced.

The antenna tuner was installed at the very top of the 707 tail - over 40 feet off the ground. This would take a cherry picker and two people to change the unit. It was a task that required a great deal of care in good weather but that night there was light rain and wind gusts of 30 mph. The weather was expected to get worse and we could see lightning flashes in the distance. Here's a USAF photo of what the procedure looks like from the ground with a KC-135 tanker. The Boeing 707 is the same airframe.

Figure 1 Changing an antenna tuner on a KC-135 tanker

At our start of shift meeting, Lou, the lead electronics mechanic, asked for two volunteers. I raised my hand and the other guys thought I was nuts. I was one of the new guys and the old-timers weren't going to let me be the only hero. So, a guy named Moe volunteered next. Moe was known for his speed in walking, talking, and in getting things done. Lou was happy that Moe volunteered. Me, not as much. I was a new guy.

Moe and I went to stores (the place with the parts inventory) and got an antenna tuner. It was a heavy cylindrical unit, at least 25 pounds. We'd have to remove the old unit from the tail, then install the new unit with the cherry picker bucket and tail buffeted by the wind. We'd have to be very careful. Dropping the unit meant severely damaging the horizontal stabilizer. The plane would be out of service for...well, I don't know how long but it would involve sending parts and men from the primary maintenance facility in Kansas City.

We put the tuner into the cab of a cherry picker and drove to the terminal - about one mile away. We drove to the back of the plane and deployed the outrigger stabilizers. We needed as stable a bucket as possible. Crashing into the side of the plane's tail was a bad thing. We chose the tools we would need and tied or taped string to them so we could tie them to ourselves or the bucket. A dropped tool would do some damage.

We got into the bucket and Moe insisted that he drive ("I have more experience at this, Sawicki"). On the way up, a wind gust caught the bucket and drove us toward the tail. Moe quickly moved the bucket back. We looked at each other and he cursed. He paused the ascent and looked at me. He didn't have to ask the question. His look meant "Do we abort?" I said, "Keep going, let's do this." but I was scared.

With the bucket level with the top of the tail, Moe removed the screws from the access panel using a magnetic screwdriver to reduce the chance that the screws would fall. He carefully put the screws in his pocket and said "left pocket" to me. Who knows what chaos awaited us - shared memory might help.

The access panel was hinged at the top so we didn't have to worry about it being caught by the wind and sailing away. Boeing designers were usually good about such practical things. The antenna tuner was safety-wired in place. With safety-wiring, bolt heads have small holes drilled through them. Steel wire, called safety wire, is fed through the hole and anchored to another bolt or a fixed post nearby. This prevents the bolt from turning (loosening) due to vibration. Experienced practitioners put effort into making safery-wiring look good. This photo shows an example of artful safety-wiring: 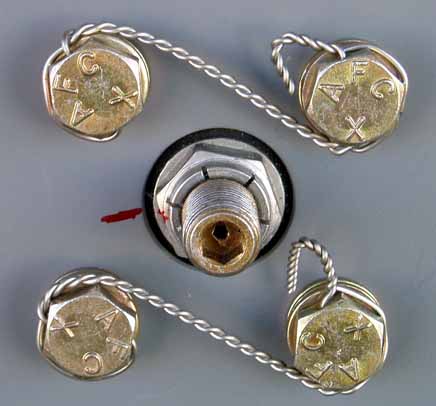 I leaned over with my side cutters and cut the safety wire, being careful to not let the wire pieces drop. Next, I leaned over with my socket wrench and removed the bolts. They went in my left pocket. I said "left pocket" to Moe. Now to remove the tuner from the tail. It was heavy and the distance from the bucket to the tail was changing as the wind blew. I said, "I think it's better if one of us does this." Moe agreed and said "You take this. I'll hang on to you." and he grabbed my coat collar with one hand and the bucket control lever in the other.

I got a grip on the tuner with both hands and waited for a lull in the wind. When it came, the bucket was about 1.5 feet from the tail. I moved one foot against the back of the bucket to stabilize myself, lifted, and then brought the tuner into the bucket. I set it down on the bucket floor next to the new unit and said "old one on right." Moe smiled because the new one still had its inventory tag attached. No chance of confusing them - as I did with a flat tire and spare tire last year.

I lifted the new unit and we reversed the procedure. Moe held my collar, I pressed my foot against the bucket, and I put the tuner in place. I took the bolts out of my left pocket one at a a time and put them in hand tight. Then I used the socket wrench to tighten them down. I removed the inventory tag and shoved it into my pocket. The inventory tag was attached to the tuner with safety wire instead of string so I did not want to drop it.

The next job was to safety wire the bolts. Moe took this. By this time, the wind had picked up and there was a lightning strike. The thunder came about 9 seconds later. Moe was counting. "Shit, under two miles." This spooked him. I was a little impressed that Moe knew the speed of sound and could judge distance from thunder. He was having a difficult time threading the safety wire. He wore glasses and the rain had made the lenses difficult to see through. I took the safety wire from him carefully (It would be bad if that dropped as well.) and managed to thread it through all four bolts and posts. By this time, Moe had wiped his glasses. He finished the job with his small vice grips and side cutters but it wasn't at all artful.

Moe lowered the access cover and I said "left pocket". No sooner was the cover secure when Moe lowered the bucket faster than I've ever experienced. We got out of the bucket quickly and emptied it of the old tuner and tools. We raised the outriggers and secured them. Moe jumped into the drivers seat and moved the cherry picker to a spot on the ramp away from the plane.

We had to perform a test of the new antenna tuner. This was done from the controller unit. This controller was located in the equipment bay in the area called the "Lower 41" that was accessible from a hatch in the bottom of the fuselage*. We opened the hatch and crawled in. You had to be physically fit to enter the Lower 41 without a stand. Moe and I had no problem with that. We performed a diagnostic and it passed. We crawled out of the lower 41 and closed the hatch.

There was the matter of signing off the squawk in the log book, so we headed to the jetway ladder. Moe took it two steps at a time as he normally did and I followed. When we entered the cabin, Moe held his thumb up for both the flight crew and passengers to see. There was a loud cheer. All the passengers were clapping and cheering. Many had wine glasses - the flight attendants (we called them stewardesses then) had kept them well-lubricated. One woman said, "Thank you, thank you. I didn't want to miss my sister's birthday party." and shook my hand. A man said to Moe, "You know, I have a daughter..."

Then I caught an image of myself in the mirror on the cockpit door. Dripping wet hair and red face. The flight crew (captain, co-pilot, and flight engineer) thanked us. Two of them had been outside part of the time watching us replace the antenna tuner but they had umbrellas. Moe took care of the log book while I did an on-the-air test of the new antenna tuner.

I contacted ARINC Radio on HF and we were good to go. The captain said something about ARINC being close by (It was on Long Island.), so I changed frequency and contacted Gander, Newfoundland for a radio check. They were 1100 miles away. Gander responded so we were really good to go, but I asked the Captain, "Shannon?", referring to Shannon, Ireland. I was joking. There was little chance of raising Shannon while on the ground at Kennedy, though I had done it once before. He said "No. no. Gander is good enough." and patted me on my shoulder. The flight engineer tried to make a joke based on "What's good for the goose is good for the Gander" but flubbed it.

When we headed out, a first class passenger shook my hand so I said "Thanks for flying TWA." Moe was back to talking to the man about his daughter - she was attending Hunter College.

When we got back to the shop, Lou had already heard the news of our success. He first asked if we had returned the old antenna tuner to stores. We didn't, so he told us to do that immediately. Then he said, "After that, go get coffee. You guys did a good job tonight." I was still no Moe in Lou's eyes but I was getting closer.

* You can also get to the equipment bay from a trap door in the cockpit behind the captain's seat but you have to be slender to squeeze by the nose gear wheel well.