The Evangelical War on Secularism

by Ed Sawicki - a secularist

In December 2017, I was asked to review a paper written by a Christian scholar that contrasts the attitudes of Evangelical Christians and secularists. The author recognizes that we all live in own “bubbles” and tries to get both sides to understand each other's position. It was my job to review the paper and advocate for the secularists. Here's a definition of secularism to get us started:

Secularism is the official position of the government of the United States. The First Amendment to the Constitution guarantees secularism through the Establishment Clause.

The first thing I noticed about the paper was that it assumed that all Evangelical Christians were not secularist. I knew that to be false. In fact, one of the reasons why I was asked to review the paper was because, in 2012, I had praised Reverend Fleming Rutledge for publishing her open letter to the Billy Graham Evangelistic Association politely scolding them for using Billy Graham's photo in a full-page New York Times ad endorsing Mitt Romney for president.

In his later years, Billy Graham became more secular, having learned his lesson when the Richard Nixon White House tapes caught him complaining to Nixon about “the Jews”. The Evangelical Christians I know claim that it was Graham's far right-wing son, Franklin, who was responsible for the ad—taking advantage of his father's declining mental facilities. Franlin and his wife are now involved in a sex scandal.

Not only are there Evangelicals who are secularists, there are many who are significantly left of center politically, especially on issues of social inequality where the poor are marginalized. Two well-known examples of left-leaning Evangelicals are Elizabeth Bruenig and Sister Simone Campbell. Watch their videos below. Bruenig and Campbell are Catholic. Yes, Catholics can be Evangelicals as well, though right-wing Evangelicals might disagree.

The author decided not to publish the paper sometime after I submitted my review. I feel bad about that. Learning how Christians bent on moving our country towards a theocracy and those on the political left differ in their outlook is useful. So, I'm publishing portions of my review of it but respecting the privacy of the author by not naming him or her.

The text in bold are the words of the author of the paper.

Charles Darwin’s book, The Origin of Species, is as important to secularists as the Bible is to Christians. Both have their books.

Secularists understand that Darwin's book, although seminal, is not the absolute and final word on the subject of evolution. Revisions to his work are expected and demanded as we gain knowledge.

Christians think of their bible as immutable. No new knowledge is allowed to alter the word of the Bible. A good example is some Christians believe that the Earth is about 6000 years old. Modern science has reliably proven that the age of the Earth is 4.5 billion years. Yet, Christians cling to the belief. They believe that the 6000 years number comes from the Bible, therefore is the word of God and must be true. Most are unaware that it is Bishop James Ussher's estimate from the 17th Century.

Secularists criticize churches for teaching their beliefs to little children yet insist that science be taught to all children in school, and at taxpayers’ expense!

We teach children about science because our modern society depends on it. We can't come up with cures for disease, the next model smartphone, or analyze the harmful effects of fracking with prayer. Of course taxpayers fund science education. It would be insane not to. We can't have only children of priviledged, wealthy families taught these skills.

You're saying that taxpayers fund science education but not religion? I've been paying for tax-exempt churches for most of my life. Taxpayers fund churches to the tune of about $70 billion a year. Plus, I've never heard of a science class advocating for the Republican Party or taking health care away from children.

Fundamentalist Christians see the present as bad and look to a future when, they believe, their beliefs will be victorious.

Fundamentalist Christians distinguish very carefully between true believers and everyone else. They keep the outsiders outside.

Christian fundamentalists are terrible at distinguishing true believers from non-believers!

The David Kuo book 'Tempting Faith: An Inside Story of Political Seduction' reveals that Dick Cheney and the Bush Office of Faith-based and Community Initiatives identified Christians as the single most gullible group to be exploited by Republicans.

This was so distressing to Kuo, who was an Evangelical Christian, that he went on TV to advocate that Christians “take a fast from politics (from Republicans)” for a while. Watch the videos below.

Today, many Christians believe that Donald Trump is one of them. Is it possible to be more gullible?

Fundamentalist Christians rigorously defend their Christian beliefs but do a poor job identifying these beliefs.

Amen to that. I've had conversations with Christians who knew less about the teachings of the Bible than I do. I have my Catholic School education to thank for that.

Elizabeth Bruenig speaking about Jeff Sessions and his policy of separating children from their parents at the border.

David Kuo is interviewed by 60 Minutes and Bill Maher.

NY Times: Billy Graham Warned Against Embracing a President. His Son Has Gone Another Way.

Fox News:Franklin Graham warns Biden-Harris ticket ‘should be a great concern to all Christians’

U Chicago Divinity School:The Klan, White Christianity, and the Past and Present 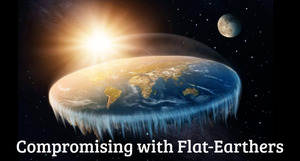