Cuba by the Numbers 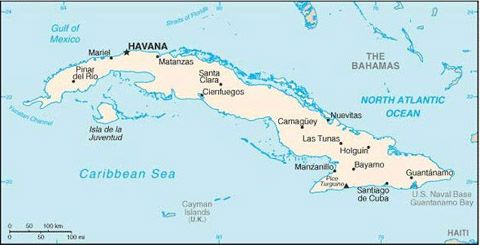 President Obama's visit to Cuba is long overdue. We should have reconciled with Cuba immediately after Russia pulled out of there in the early 1990s. We didn't because the Cuban community in Miami is powerful politically and they didn't want reconcilliation as long as the Castros were still in power.

Since Cuba has been isolated from the U.S. for over 50 years, here's a table of data to get you up to speed. I'll be adding data here as well as commentary as I find it.

Cuba became communist in part because of the massive corruption caused by U.S. companies bribing the Batista government. President John Kennedy realized this. He said of Castro:

“I believe that there is no country in the world including any and all the countries under colonial domination, where economic colonization, humiliation and exploitation were worse than in Cuba, in part owing to my country’s policies during the Batista regime. I approved the proclamation which Fidel Castro made in the Sierra Maestra, when he justifiably called for justice and especially yearned to rid Cuba of corruption.

I will even go further: to some extent it is as though Batista was the incarnation of a number of sins on the part of the United States. Now we shall have to pay for those sins. In the matter of the Batista regime, I am in agreement with the first Cuban revolutionaries. That is perfectly clear.”

The Atlantic: How Cubans Live as Long as Americans at a Tenth of the Cost