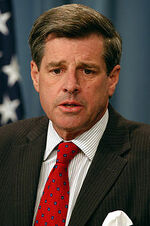 ISIS exists today mainly because of significant mistakes made in 2003 by Paul Bremer, the Administrator of the Coalition Provisional Authority. Bremer was appointed by President George W Bush and followed the direction of Secretary of Defense Donald Rumsfeld. Congress had little say in the goings on in Bremer's Iraq, having voted for the Authorization for Use of Military Force Against Iraq Resolution of 2002.

Bremer's first day on the job was Monday, May 12, 2003. The next day, Bremer issued his first order [1]. It was to remove any members of the Ba'ath Party from holding government jobs. Thousands of people lost their jobs. Many were doctors, professors, school teachers, and bureaucrats.

You could not reach high positions in the government or in schools without becoming a Ba'ath party member. Membership was also a prerequisite for university admission. This reminds me of growing up on Long Island (New York). To get a good job, it was best to be a Republican. Iraq was no different. Most people were not party members because they ascribed to the ideology - they just wanted good jobs.

This created an employment vacuum in Iraq's public sector that could not be satisfied from the remaining population. Most of the skilled people were disqualified. (This reminds me of the post-WW2 joke about why there are no good comedians in Germany.) The Bush administration's solution was to have U.S. contractors assume the tasks of Iraq's government agencies. More on this later.

During his second week on the job, Bremer issued his second order [2]. He disbanded the Iraqi military. Here's a video of Iraq-vet General Paul Eaton describing the insanity of this: “instantly almost half a million potential insurgents”.

Some say that Bremer didn't make a mistake; that it was part of a master plan to turn Iraq into a neocon paradise. He instituted a flat personal and corporate income tax that did not exceed 15 percent. [3]

The Department of Defense (Bremer's employer) arranged for U.S. companies to contract for providing services in Iraq to replace native services that were no longer viable because of de-Ba-athification. In hundreds of cases, U.S. companies replaced Iraqi government agencies and companies. [8]

In many cases, those contractors engaged in waste, fraud, and abuse and the Department of Defense was doing nothing about it. [9] Representative Alan Grayson (D-FL) decided to do something about it, so his law firm sued a contractor on behalf of the U.S. government and won, but most contractors escaped prosecution.[10]

All of this had predictable results: mass unemployment of Iraqi citizens, less government revenue, Iraqi money leaving the country, and no future for its young people. Throw in the tension of religious differences and you have a country with no chance of becoming stable. This created bitter divisions in Iraq and many of these people are now members of ISIS.

Had Bremer left the Iraqi military in place, the U.S. would likely have left Iraq years earlier, spent far less money, lost fewer soldiers, and prevented ISIS from gaining a foothold today. The killings now going on in Iraq are the direct result of neocon policies. Now we're in it for the long haul and we'll spend many billions of our children's' dollars - all on a failed neocon experiment.

[10] Iraq: I Did My Part by Rep. Alan Grayson, U.S. Congressman for Florida’s 9th District

[11] Mistakes Were Made by Moisés Naím - a book review